This past weekend I went to my second Awesome Con, which I had never heard of before moving to Washington DC. I only went for one day last year but really enjoyed it so I decided to go for two days this year! 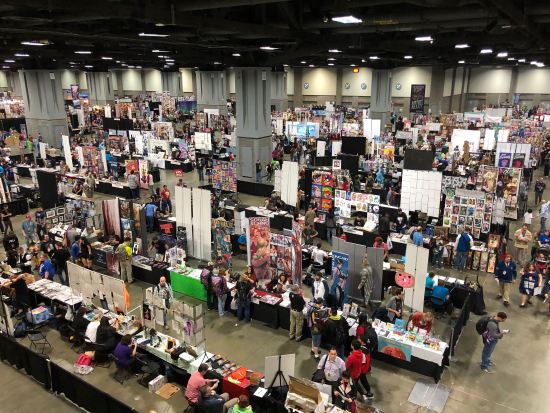 John was under the weather so I went by myself for part of day one; a friend met up with me later in the afternoon and used John’s pass. Unlike last year, there was no line to get inside—but this time I arrived well after the place opened. My first stop was a cosplay cosmetics panel that wasn’t exactly what I had pictured. I had imagined a live demonstration; instead it was two cosplayers answering questions about makeup for cosplayers. Seeing as how I’ve never cosplayed, the panel was still informative. I learned that you can literally buy a bag of “hair” (it’s actually wool) for applying facial hair and such. Who knew?!

I was really impressed with Awesome Con cosplayers this year, like these gender-swapped Jayne Cobb and Kaylee folks: 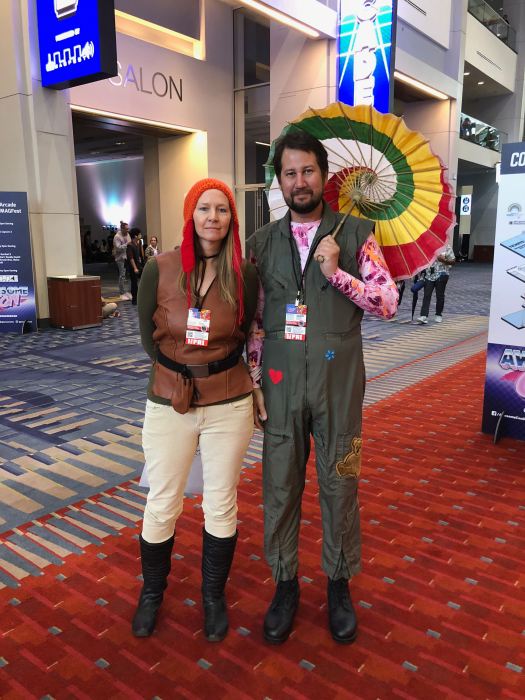 And then there was this guy—the Pennywise to end all Pennywises. He made this costume! Check his Instagram out: @frightness_fx_studio. This costume is nightmarish and also SO AMAZING. 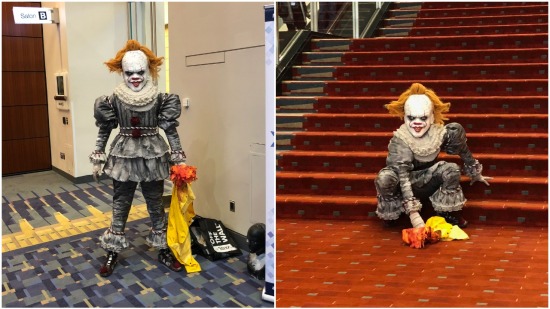 Once I met up with my friend we wandered around the show floor for awhile and then headed out. I was already pretty tired from walking around and needed to rest my feet for Saturday!

I arrived at the convention center earlier on day two and saw this amazingness as soon as I got there:

I headed straight for the Legendary Comics panel, where they discussed three titles: Pacific Rim: Adaptation, Firebrand, and Cursed. This panel was fun, especially due to the appearance of John and Carol Barrowman. They’re working with writer Erika Lewis on Cursed, which looks great. (So does Firebrand, which Erika co-writes with Jessica Chobot of Nerdist.) John Barrowman is ALWAYS a riot. In the below pic he’s demonstrating how NOT to draw a woman standing because really, who stands like this?! 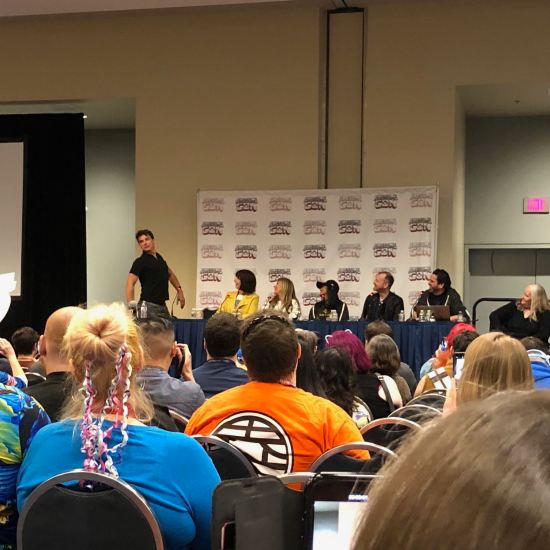 After the panel I went to the exhibit hall and chatted with Erika Lewis at her signing. I came home with a signed Firebrand poster and am starting to read the comic, which is not in print but is available on WebToons for FREE!

I spent some time wandering the exhibit hall by myself and snapping pics of more awesome cosplayers, like this Black Panther and Killmonger (find Killmonger on Instagram @blackhispanic_. 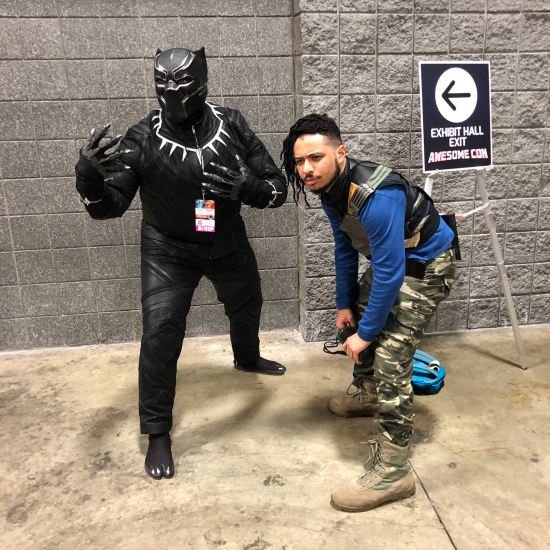 Sharknado costumes are never not funny: 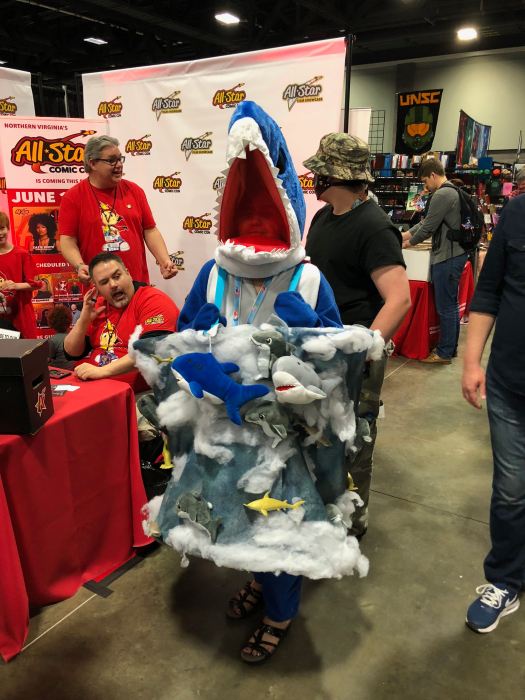 Bob Ross was an especially popular costume this year—I saw at least three men cosplaying as this happy little painter, and there are also several Funko Pops of him! 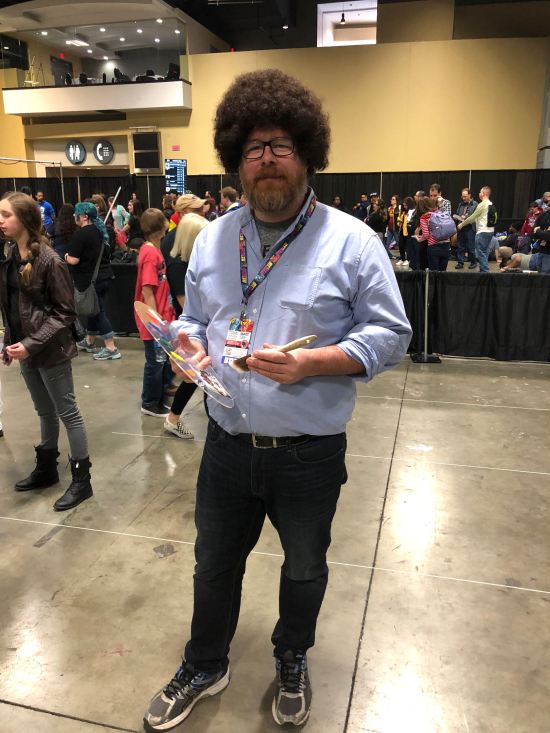 Guardians of the Galaxy group cosplay was popular this year as well, probably partly due to the fact that Dave Bautista and Sean Gunn were con guests. The Yondo in the below pic is the same guy I snapped a pic of last year! 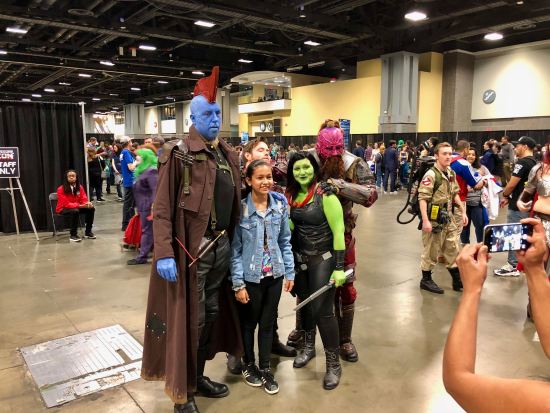 This Guardians group was into it too: 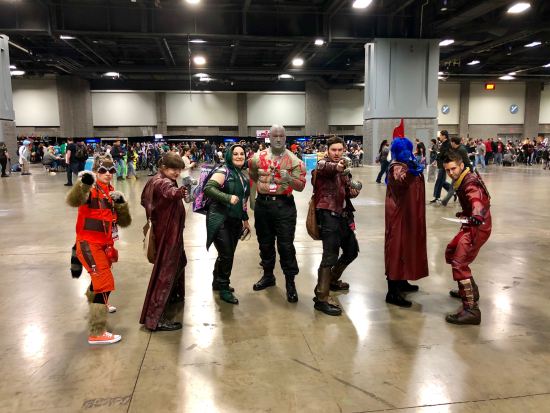 I love nerd conventions because where else can you see Business Deadpool petting a porg carrying an Eat Mor Bantha sign (alongside an Ewok, too)? 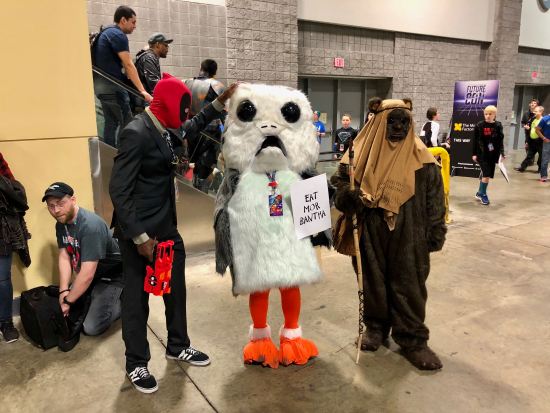 After more wandering, gawking, and a little shopping, I needed to rest my weary feet. So I went to the Super Art Fight panel, which John and I had a lot of fun at last year. My pics were pretty bad so I’m not including any here, but needless to say, it’s a really entertaining panel—the perfect place to laugh while you take a load off.

John was feeling well enough to join me at the convention, so we met up and walked around together. On our way to the exhibit hall we found this Krampus posing for pics. I’ve never seen a Krampus cosplayer before, and he was really impressive. After looking at Pennywise’s Instagram I discovered it’s actually the same guy! Great job yet again! 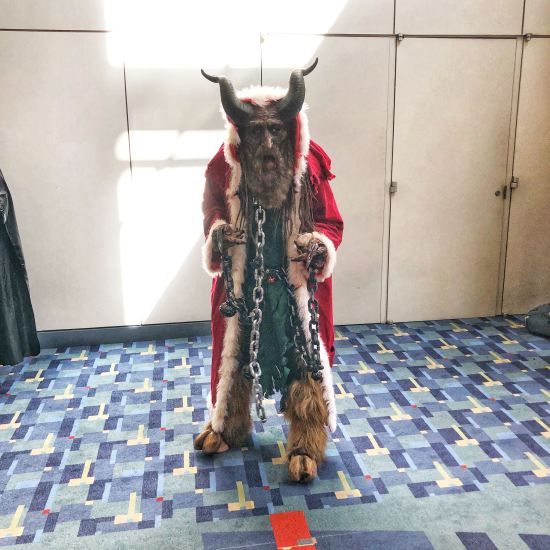 We also found these disturbing guys on the show floor. I have no idea if they’re from anything in particular or if they’re just a bunch of furries in scary masks. Whatever they were, I liked them. 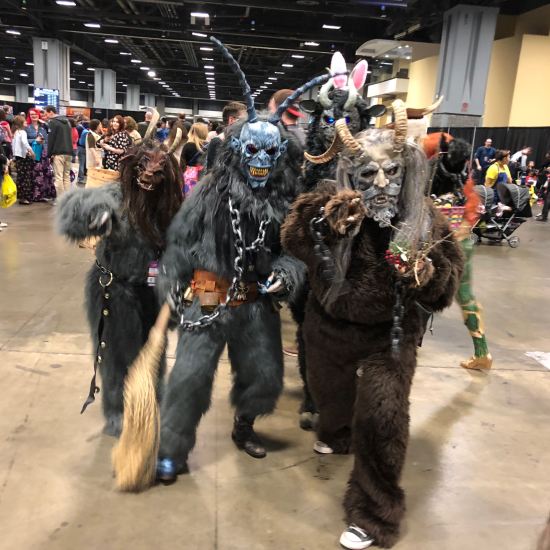 It was exciting to see this amazing Vice Admiral Holdo cosplayer! The back of her dress was perfect.

I loved this Black Panther cosplaying family (tbh I’m not sure who the character on the right is…please comment if you know)! Really great Killmonger and mini Shuri. 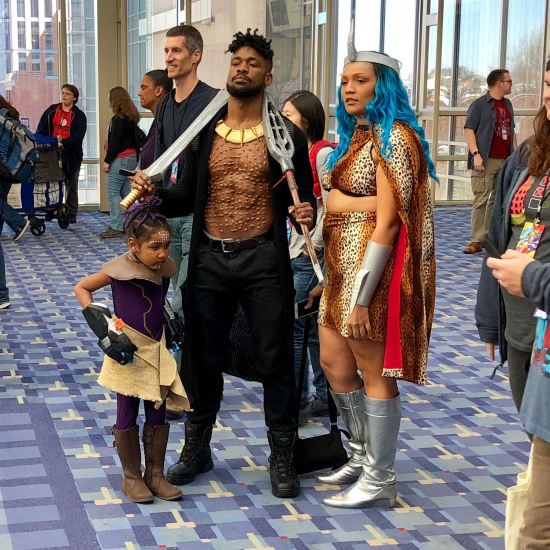 There were more anti-Tr*mp t-shirts again this year (plus a fun Spock Obama. Spobama?). 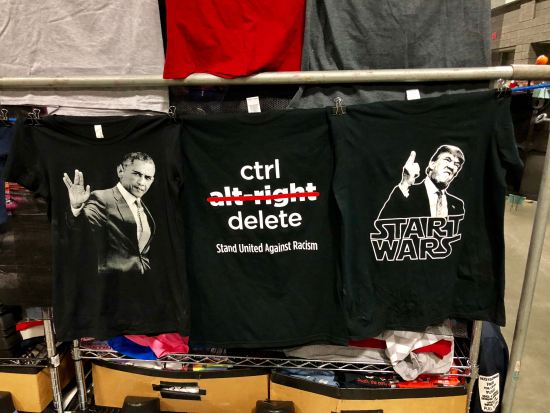 I didn’t buy as much stuff as I did last year, but here’s my little haul: 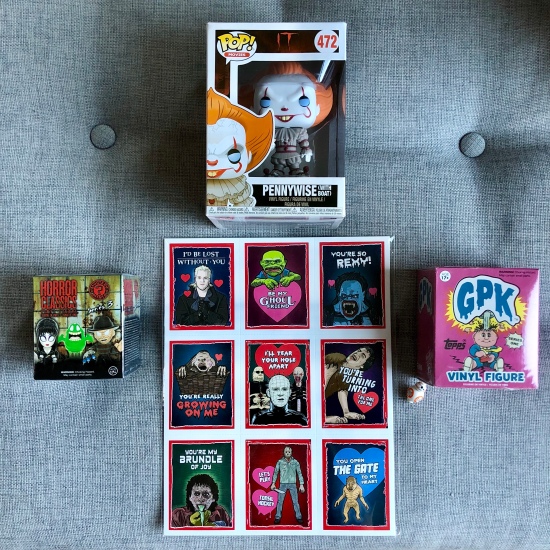 Funko has several Pennywise Pops and I ended up buying the least scary one (haha…it’s still frightening as hell).  Once John and I started walking around together we found an artist named Matthew Lineham and bought these 80s horror movie Valentine’s Day cards from him (the Basket Case card was what sold me). He also sells cool prints of New Wave musicians, so check him out if you’re a fan of that musical genre.

Before John showed up at the con I bought him a tiny Lego BB-8 (it’s hard to see in the above pic but it’s to the left of the GPK Mystery Mini box.

I can’t leave a con without buying at least one Funko Mystery Mini blind box! This time I bought another Horror Classics and a Garbage Pail Kids. When I opened the horror box and felt what was in the bag, I could tell it was a figure we already have…so I’m going to give it to someone as a gift. The GPK mini turned out to be Teevee Stevie, who now watches us while we watch TV. Not creepy at all. 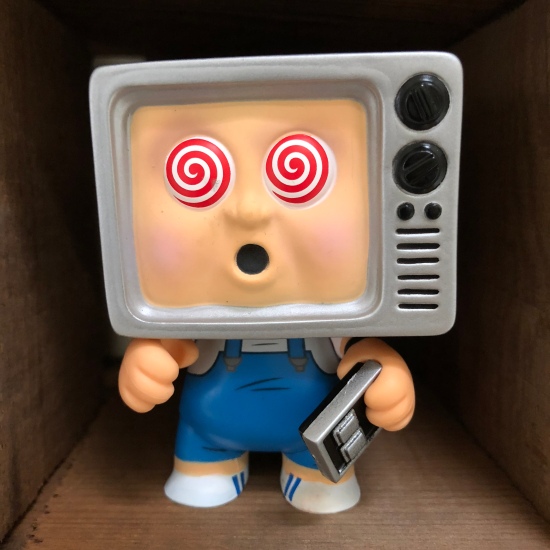 And here’s a close-up of the Pennywise Pop that you definitely don’t really want to look at:

All in all, I enjoyed Awesome Con 2018! I kind of wished I had bought a three-day pass so I could go see Stephen Amell’s panel on Sunday, but my feet couldn’t handle three days in a row of that much walking. Even though I was totally worn out on Sunday, I definitely had a little con FOMO that day! There’s always something fun to see and I’m really glad I went. And this year there’s plenty of recovery time in between Awesome Con and San Diego Comic-Con. YAY NERDINESS!

END_OF_DOCUMENT_TOKEN_TO_BE_REPLACED

Hey there! I’m Sarah (aka “Herman”) and I love geeking out about beauty products, food, pop culture (especially TV!), travel, and whatever else I feel like at the moment. My pronouns: she/her/hers.

More about me here.